Blendini Motorsport was founded in 2010 by Tom Roche.

Since starting out with one Mazda Mx5 hire car, Blendini has grown to manage over 30 different race cars for customers all around the world as well as 20+ Experience day cars with Car Chase Heroes

Based in South Wales, Blendini Motorsport offers everything from performance road car servicing to a full arrive and drive weekend in their Audi R8 LMS GT3 car!

As a highly decorated Championship winning driver, Tom had a passion for cars from a young age, going through karting and winning multiple championships as he progressed to full on race cars, driving everything with 4 wheels, he could get his hands on. On his journey he was given the chance to race in the USA driving a Champ car, a Nascar and a very rare Corvette. His growing fascination towards American Muscle became a passion and he was given the opportunity to race in the famous Laguna Seca Monterey Classic.

He has made a name for himself racing Mazda's, MK1's and MK3's in the UK and becoming a 9 times UK champion. He has raced in British GT with the very impressive Audi R8 LMS car and in 2017 guest drove in the Toca GT4 Ginetta Super Cup, picking up 2 race victories in a car he had never driven before!

Given his extensive experience, he found that he had an ambition of offering to help bring new drivers into the sport and as such, Tom not only offers a one to one coaching service, but his team of highly trained mechanical engineers will take care, setup and keep your car in perfect condition. Blendini Motorsport have an ethos,

'Winning is simply a recipy. As long as you have the right ingredients and a first class chef then, Voila'! 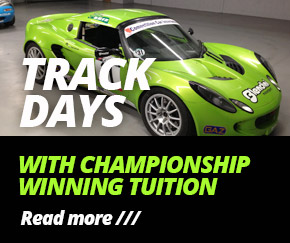